A Basic Guide To Sherry


Before we start let’s erase all preconceptions and distant memories.  Forget the crystal decanters on the set of Yes Minister, and the dusty bottle in Grandma’s cupboard and let’s also delete any recollections of bottles labelled with the word “sherry” but also bearing the words “British”, “” or “South African”.  Thankfully these horror stories are consigned to ancient history. They are not, and never were, Sherry and labelling such wines in this way is now illegal.  When I say “Sherry” I’m talking about the wines made in a corner of Andalucia (southern ) in what is known as the “Sherry Triangle” based on the towns of Jerez de la Frontera, Sanlucar de Barrameda and .

Sherries tend to be aged in a Solera System where new wines from each vintage are added to the start of a series of barrels and a proportion of the contents is moved, each year, to the next barrel in the sequence (each level is called a "criadera") with up to one third of the contents of the final barrel removed for bottling and sale.  No barrel is ever emptied and the new wine which is added takes on the properties of the wine it joins thus creating a consistent style and ironing out any vintage variation.  It’s why styles of sherry are so stable.


Let’s bowl out the exceptions first in the form of Moscatel and Pedro Ximenez (PX).  These are the only naturally sweet styles of sherry and also the names of the grape varieties that produce them.  Moscatel is grapey, sweet and a bit like a big pudding wine.  PX is made from sun-dried PX grapes and is dark and intensely sweet – sort of  alcoholic liquid raisins.


With Moscatel and PX out of the way I can generalise a bit and tell you that all other sherries are made from the Palomino grape and they are all naturally dry.  Got that?  I say again, all naturally dry.  Yep, unlike port where the fermentation is stopped by the addition of spirit (thus leaving unfermented sugars, resulting in a sweet wine) the fermentation of sherry is allowed to finish before the spirit is added (this is called fortification) and the wine is already dry with all the natural sugars having been turned to alcohol.  It’s only after fortification that the real magic begins! Any sweet or medium sherries you therefore encounter were originally dry and have been adjusted with sweetening wines made from our old chums Moscatel and PX.


The magic then… Unique to this particular area of (apart from the Jura in eastern and a tiny bit of , or so I’m led to believe) is a naturally-occurring film of yeast which settles on the surface of some (but not all – and nobody knows why) casks of sherry.  This film of yeast is called Flor and does the double job of lending its own particular flavour to the wine and, where it completely covers the surface of the wine, protecting the wine from oxidising through contact with the air.  Sometimes the flor isn’t complete and air starts to oxidise the wine, sometimes the flor forms, but then dies off and sometimes it doesn’t form at all and the wine begins to oxidise straight away.  All of these variants produce different styles of sherry as set out below – and all because of a quirk of nature!

Fino – produced in Jerez de la Frontera and Puerto de Santa Maria where a flor covering has remained protecting the wine throughout its ageing in the solera.  The result is a very pale, dry and fresh sherry which is the perfect aperitif though the Spanish drink it with food too (so we should as well).  Think big white wine – serve chilled.  It’s not seen any oxygen whilst ageing though so will oxidise once opened thus a bottle is best consumed within days (or in our house hours) of opening.  Better still, buy 2 halves and keep the second one unopened to retain its freshness until the first one has gone.  Click here to browse our range of Sherries.

Manzanilla – a style of Fino made in Sanlucar de Barrameda which, being by the sea, inherits a salty tang whilst ageing and is lighter, crisper and even drier than other Finos.  The same rules apply about keeping it fresh, buying halves to assist if appropriate, and serving chilled.  Warning – this stuff is dangerously addictive!  Look out for Manzanilla Pasada which is an older Manzanilla (about 7 years) where the veil of flor starts to fade and the wine takes on a richer style.  Some Bodegas stop short of Pasada status but still produce an older Manzanilla which has a bit more concentration and depth than the regular version. Click here to browse our range of Sherries.
Amontillado – started life as a Fino (or Manzanilla) with flor influence but then also began to oxidise because the flor didn’t form properly or has died off (which may have been encouraged to occur by the level of fortification) thus allowing a degree of oxidation.  Still crisp and fresh in their natural form and also naturally dry.  Quite complex and rich with a nuttiness to their flavour.  All Amontillados are naturally dry (because all such sherries are dry remember?) but often those sold on the market have had sweetening wines added to make them “medium”.  Best check with the retailer to see whether you’re buying a naturally dry version or one that’s been “mediumised”.  I’d still be serving these chilled incidentally. Click here to browse our range of Sherries.

Fino/Amontillado – quite rare but a halfway house between the two styles where there has been less oxidation than a full Amontillado but the wine still has the obvious flor character of a Fino.  Well worth seeking out.  Serve as Fino. Click here to browse our range of Sherries.

Oloroso – these are what results when no flor formed in the first place, largely because they were fortified to a higher booze level to prevent flor forming.  The wine therefore began to oxidise from day 1 and has continued to do so.  Dry again of course though versions are sweetened up so again it’s best to check.  The Spanish still serve these chilled (so I would too) but it’s up to you.  They can be complex and flavoursome wines. Click here to browse our range of Sherries.
Palo Cortado – this style is pretty rare and sits between Amontillado and Oloroso in terms of flavour.  It begins life as a Fino or Amontillado but then wakes up one morning and decides it actually leans the other way and starts to age as an Oloroso.  Nobody knows why but winemakers get very excited when this happens.  Though rare this change seems to produce the best of both worlds and sherries of intense flavour and complexity.  Fantastic stuff! Click here to browse our range of Sherries.

Cream – Oloroso base wine with Moscatel and PX added to produce a sweet style popular in the but almost unheard of in .  This is what Mothers-in-Law and elderly maiden aunts run on and is probably the bottle that ought to be in Grandma’s cupboard that we mentioned at the beginning…

Sherry is one of the finest experiences that they world of wine has to offer.  Some people claim they don’t like Sherry; they’re wrong.  They just haven’t tasted the right one yet. Click here to browse our range of Sherries - you must be ready for a glass now, and if you're not ready just have a look at this picture for a while... 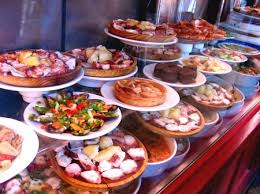 Posted by Wines Of Interest at 08:26 0 comments

About Wines Of Interest

Wines Of Interest
Ipswich, Suffolk, United Kingdom
Despite frantic contrary insistence from today's marketeers we regard our "no-brands" approach as a vital strength. We buy direct from the grower wherever it makes economic sense and concentrate on quality wines made with passion and commitment. This need not mean expensive and does not exclude more commercial options. We have personally tasted and selected every wine that we list and are confident that each is a good example of its type, in its league, at its price.